Wow, where did June go?! I didn't realise it had been quite so long since I last posted. I remember after Me Made May last year feeling a bit over computer time too - all those Flickr posts! - and maybe the same thing's happening this time around too. I have been keeping up with other people's posting though - which is inspiring and effortless.

While I think of it, can I ask a question of those of you who follow blogs through Bloglovin? I've been finding that every now and then BL will stop notifying me of new posts by some of the blogs I follow. I still get a daily (or almost daily) update email, but it seems to randomly omit some, and it's only when it occurs to me I haven't heard anything from so-and-so for a while, and look them up, that I find two/three/four posts I've missed. It's not all the time, nor it always the same blog, and the blogs in question is always still on my list there (ie, BL hasn't unfollowed it), so I'm a bit flummoxed by the whole thing. Has anyone else experienced this? Have I missed something that I should have done? Advice, please!

On to completed projects! I have a feeling that the next several are going to be "catch-up" ones; I'm a bit behind on that front. But that's probably a good thing, because I've been so busy sewing costumes for the school production that I don't have anything brand new anyhow. (On that note, today I made Maria's wedding dress...out of a tablecloth. Hey, if you can have play clothes made of curtains...)

Here's my latest knitting project, that you may have noticed during May. It's the Aidez Cardigan by Cirilia Rose.  I've done a bit of gift knitting this year (will lump all of them together in a later post sometime) and I did one of these for my niece's birthday in March. Loved it. Wanted to keep it. Didn't. So I made one for me, to fill the wardrobe gap that last year's disastrous Cozy Cardi was supposed to fill and failed to so dismally. 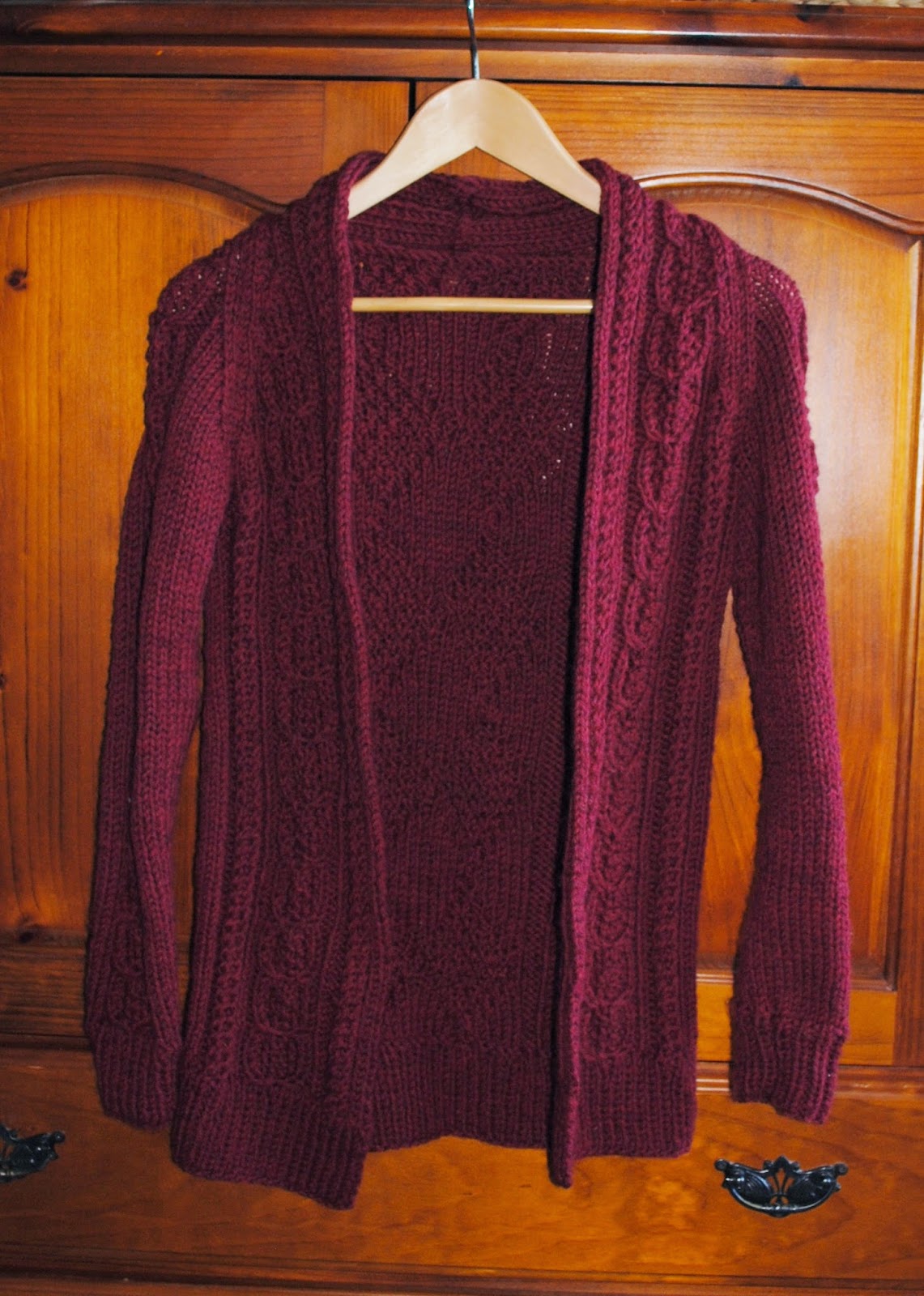 Knits don't seem to photograph well on a hanger, huh?

This is Bendigo Woolen Mill's 12 ply Rustic in Radiant. I love this red. The colour's not a flat solid colour; it's got a lot of depth to it. When you look closely (really closely) it seems to be a mix of scarlet, burgundy, purple, navy ( I think) and a golden yellow. It's got me thinking about dyeing wool once I master spinning (which is not coming to me as easily as I hoped it would...). My mum just gave me a beautiful book of patterns using handspun yarn - with commercial yarn substitute possibilities for those times you give up in disgust - and one green shade I was admiring was apparently reached by blending wool  ( 3/4 of it forest green and 1/4 lime green) with five different shades of mohair - royal blue, dark purple, magenta, bronze and yellow mohair. I'm intrigued by the whole process...

Enough of theory though - here's reality. Aidez has got four different cable patterns, two on the back and two on the fronts, and the larger front one is repeated down the sleeve. The sleeves are raglan, and the front bands (knitted as part of the main front body) extend up to form a higher collar at the back. It's definitely cozy! I'm finding wearing anything with a longer sleeve than a cap underneath it makes me ready to melt. One just for the coldest days or nights - or maybe camping, come to think of it. 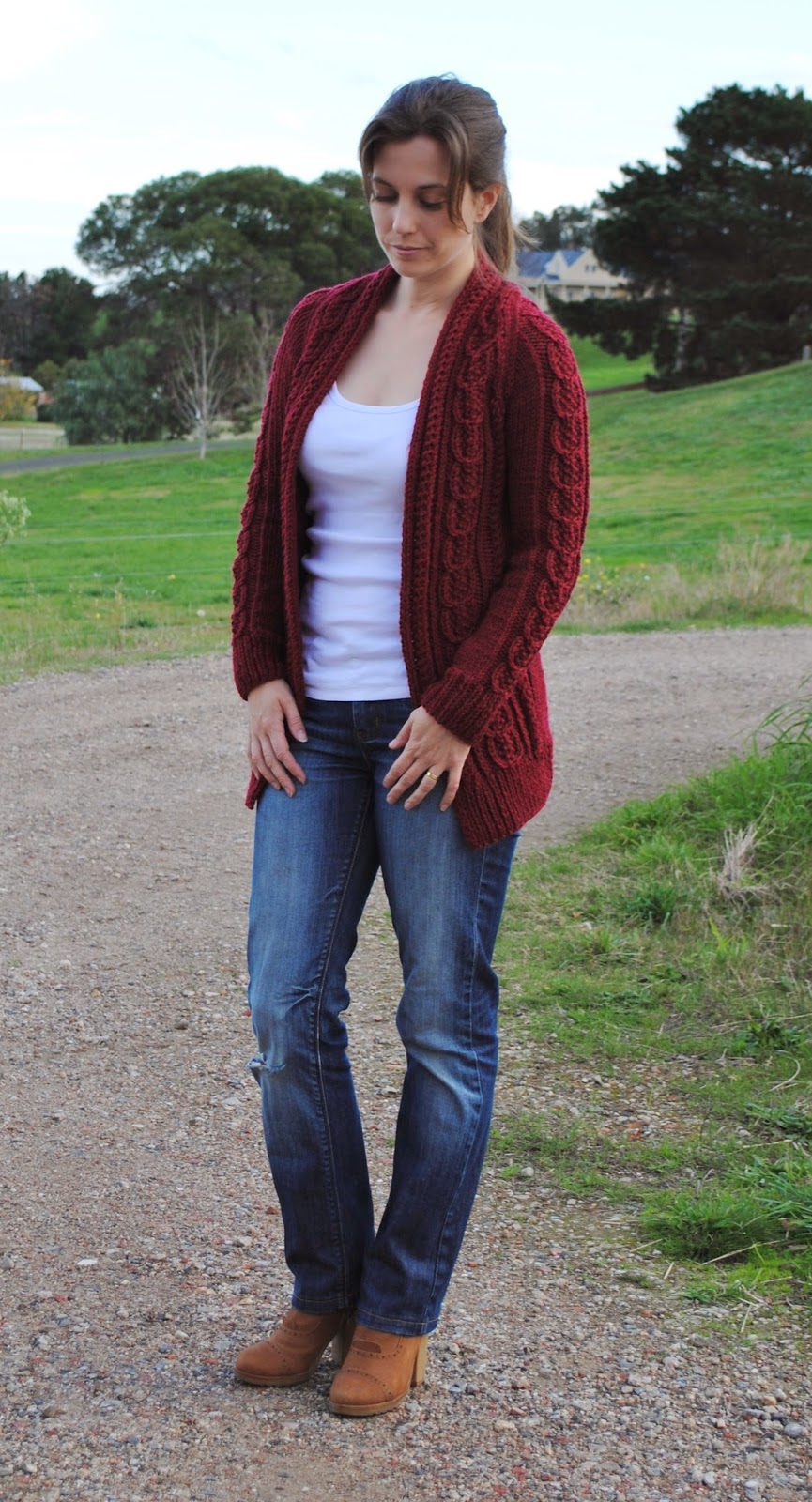 I'm always happily surprised by how quickly a project knits up the second time around. Familiarity is a wonderful thing :)

I LOVE the back cable panel... 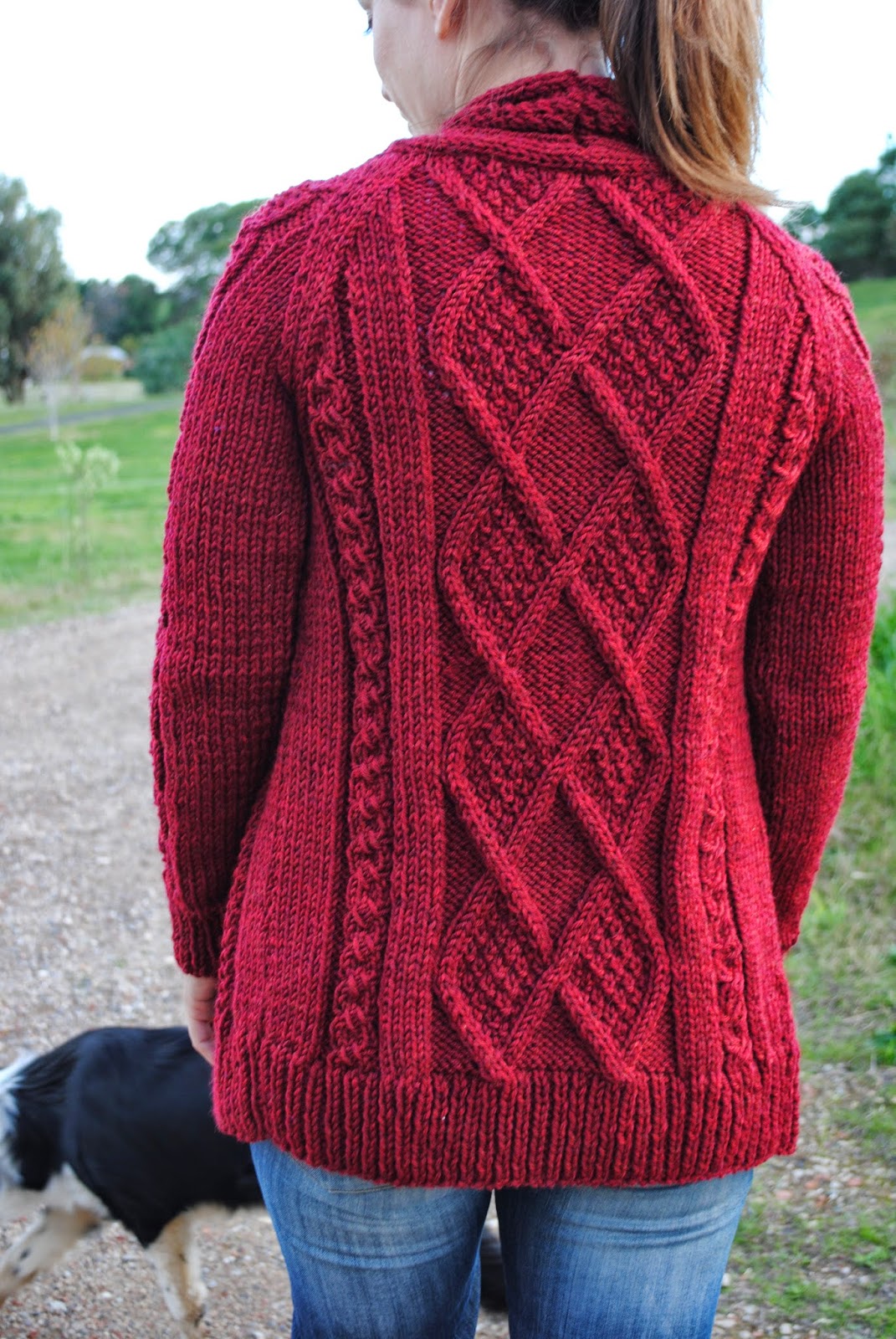 You can see how high the back neck is here. The instructions said to cast off and then seam at the end, but I've made other cardigans like that before and have never been really satisfied with the finish. So I kept the stitches on a holder until I was sewing it all together and did a three needle bind off instead. Worked a treat. 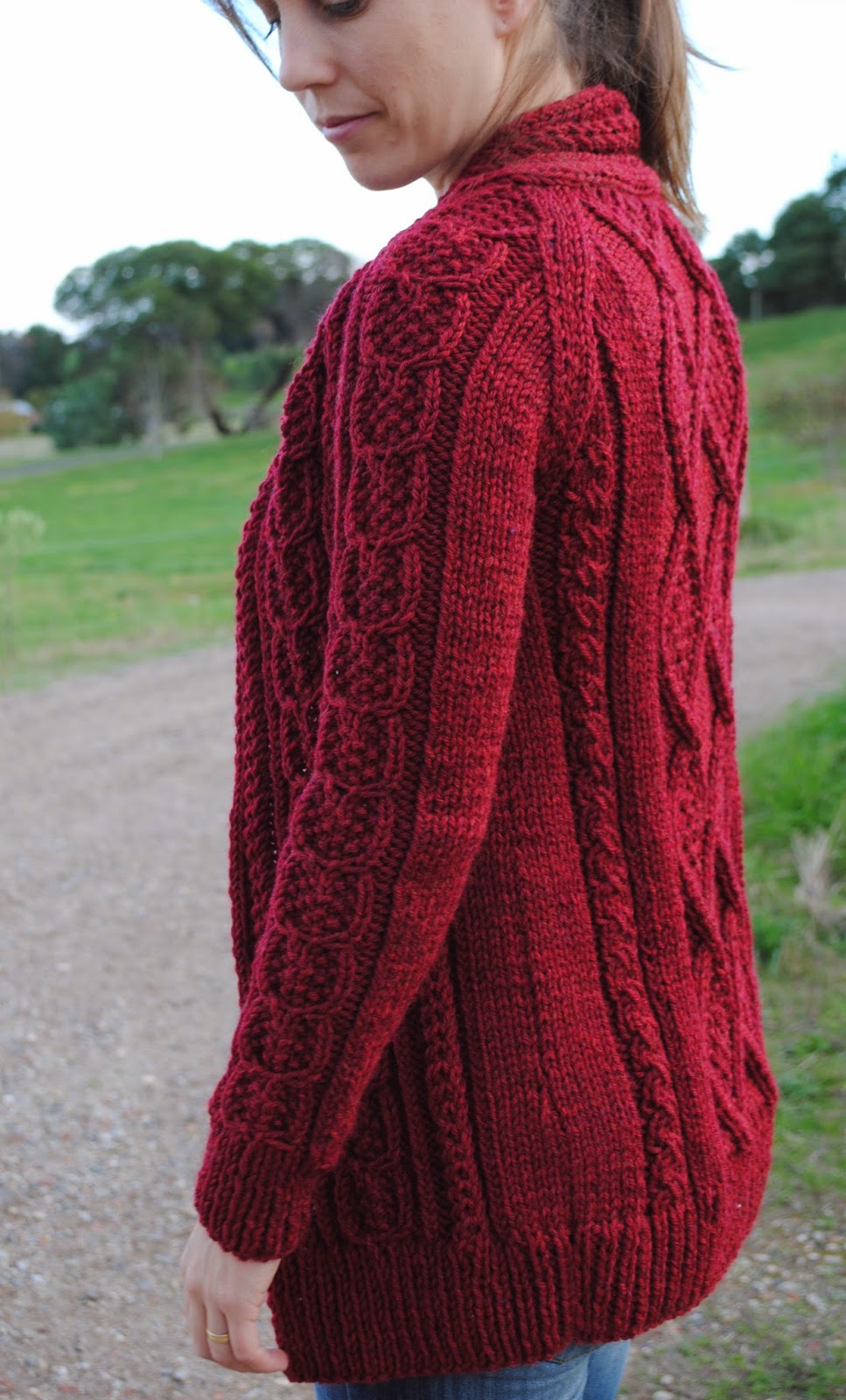 The weather's taken an icy turn recently (well, what we in Australia term icy, anyhow!), so this cardi's getting a lot of love. I think next year I want to add an oversized, boyfriend-style jumper into the mix. I've seen a stripe patterned one I really like the look of. It's one that uses two stands of wool at a time though, so quite a lot of yarn is needed for that one. Might have to save up a while, I think!

Speaking of the 2014 goals, I'm not doing too badly:
Ziggi jacket - cut out, though I ran out of time before costume sewing started in earnest.
Shirt? Check.
Tailored pants? Check.
Blazer? Er, no, but I bought a pattern last week.
Underwear? Still excited to try, but no actual progress yet.
Spinning? Attempted. Not great at it yet.
Gaining confidence with knit sewing? Hurrah!
Colourwork knitting? See above :)
Wardrobe plan? Definitely written down, although not actually followed....

Did you plan any goals for 2014? How are you going with them?

Now, off to check that Bloglovin hasn't jibbed me out of any posts recently....
Posted by Danielle Krivan at 5:36 AM 20 comments: