Well, hello! I've been missing in action for way longer than either I expected or planned, but it's not for want of sewing activity. More on that in a moment. First, and I really couldn't be more excited about this...I made jeans! Jeans that fit! Jeans that look like jeans!!

During Me Made May last year I'd often thought jeans would be a useful handmade item to throw into the mix, but although I bought Named's Jamie Jeans pattern I didn't do anything about it until my RTW Old Faithfuls finally gave up on life. They wore out beyond repair right under the butt, and it occurred to me that if I carefully took them apart I would have a serviceable jeans pattern with all fit issues already resolved. Plus, they weren't a stretch denim, so I wouldn't have to calculate or compare stretch percentage. I got excited and bought some similar weight denim. Then I got intimidated and shoved them to the bottom of the queue.﻿

In the meantime, the Ginger Jeans pattern was released, and all manner of beautifully sewn, frankly professional-looking jeans started popping up on blogs everywhere. My jeans-to-be started to creep back up the project list. The more I read the more do-able jeans seemed. So I blocked out a week's worth or so of sewing time and pitched in.﻿

There were no instructions, obviously, so I relied heavily on the Closet Case Files Ginger sewalong tutorials - especially for the fly front. The other thing that was hugely helpful was that when I unpicked the original I took care to keep one side of anything doubled intact. For example, one side of the back leg remained with pocket and yoke, the other was unpicked down so that all pieces were separate. This helped not only with seeing how it all went together, but also as a guide for topstitching. (The fly front I just took lots of photos of before unpicking and then prayed fervently.)

I don't have a particularly fancy machine, and found that I didn't have any problems with the denim layers. There were a few times I needed to manually turn the side handwheel briefly on very thick layers, but that was it.
I used a triple stitch on all the leg seams, and just overlocked raw edges. (I'd like to try flat felling next time, but I wasn't going to deviate from what was on my original pair this time around.)
﻿ 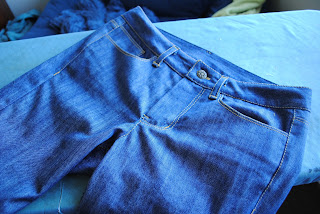 The main fiddly aspect I found was changing needles and thread on almost every seam. It helped to know it was worth the trouble though; the specific topstitching needles my local sewing shop put me onto made it SO much more hassle-free than what I was expecting/ dreading. The topstitching thread was Gutermann (3 x100m spools!), which mostly worked well. Very occasionally it snarled up behind the eye of the needle and needed to be cut and rethreaded, but I'm not sure whether this is just a typical issue with thick thread. Anyone know?
Two other tips that made topstitching a much happier experience were to set the stitch length to 4 (the longest setting on my machine), and using the edging foot attachment. (Oh, how I adore this foot!) I mimicked the topstitching and bar tacks on the original jeans and I'm really happy with the result. 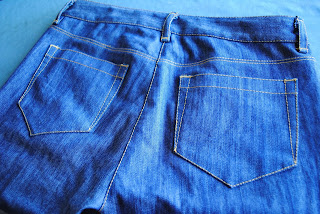 The pocket linings were of a leftover cotton lawn from the stash, as was the gingham bias binding I used for the internal fly pieces. The fly isn't perfect on these, but I think I know what I did wrong and will try and improve on that next time.﻿
﻿ 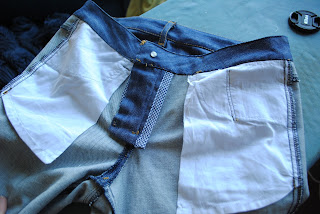 One thing I've learned since is that you can actually use any length zip. Once you sew it in place it doesn't matter if the metal stops at the top are visible or not, since the waistband sewn in above will stop the zipper pull from going anywhere. I really loathe the zip I used; it was the only 5cm navy one I could find and the zipper pull is huge. So I'll definitely change that aspect with any future pairs.
I have to confess to making a complete hash of the buttonhole. For some reason, even though it had been fine with the topstitching thread, I was convinced the machine wouldn't cope with sewing a buttonhole and tried to do it with the ordinary navy thread instead. It looked unspeakable, so I tried to go over the top with the thick gold thread. Hands up everyone who knows you can't sew over a cut buttonhole successfully? (Both mine are waving here...). In the end I tried to cover it up by a narrow zigzag stitch over the cut edges. It's dreadful, but at least it's mostly hidden by the button... 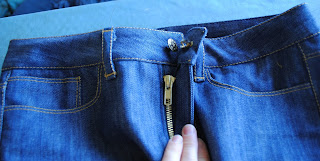 These niggles aside...I made jeans! I'd love to have rivets on the pockets, but couldn't find any at the time of making. I've since seen that Thread Theory now stock them in their web shop (God bless the online sewing community!) so will have to invest in some, methinks.

I mentioned last post (in August!) that for summer sewing I was going to try and put together a capsule wardrobe. I think I expected this to be easy. Well, it isn't! I've never invested this much thought into sewing plans before. Of all the blogs and posts I've read I've found Unfancy the most helpful; I like that her approach doesn't include accessories, loungewear, exercise gear and formal wear but focuses more on everyday stuff. Mine's taking shape, but still has some refining to do. If I can let go properly of the idea that it has to be The Perfect Wardrobe, I think I'll get it done. That's another thing I like about Unfancy - she stresses it's a process that you improve and fine tune each season.

Finally, and the reason it's been so quiet around here of late, I've started up a new venture: 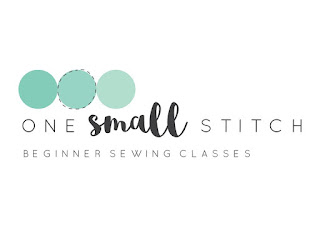 Yup, it's all happening! I've set up small group, project-based classes, catering for people who'd love to learn how to sew, but are a bit daunted or unsure as to how to get started. There's so much resource out there now for people once they've begun, but my aim is to help them get over that initial intimidation and to see them surprise and delight themselves by what they can actually sew. It seems to be working! You can get a taste of what's happening (even if you obviously have no need to attend ;) ) via Facebook or Instagram.
Now that classes are up and running, I'll try and be a lot more regular about posting here; there's a worrying number of unblogged projects around these parts. I have an awful  feeling that by the time I get around to the summer makes we'll be smack bang in the middle of winter again...
What are you working on at the moment?
﻿