I know, I'm pretty late to the party on this one! I feel like just about everyone in the online sewing world has made and blogged Deer and Doe's Plantain Tshirt. Confession: whenever I hear the phrase "must-have", the can't-make-me gene I inherited from my mother's side quietly kicks in. But I've seen some lovely versions of this, on very different women, and so this pattern has been growing on me for a while. Plus it's free...

For those who haven't come across it, it's a basic scoop neck tee with the option of either 3/4 or full length sleeve (with elbow patches too, if that's your thing). It's an A-line shape, as you can see below, and that's partly what made me hesitate when I first saw it. Most of my life I've been fairly straight up and down, (a Column, minus the height, if you're into Trinny and Susannah) and so felt that defined waists were most flattering on me. Any tops or dresses that flowed from the shoulders or bust made me look about twelve - and an underdeveloped twelve, at that. But the last year or two have seen things, er, redistribute a little, so I thought I'd give it a go!

I'm glad I did! I really like the way this sits on me - below is the would-be-muslin-but-now-promoted-to-fully-fledged-wardrobe-member. It's a fairly stretchy but very stable knit without much drape that I picked up on sale at Spotlight about eighteen months ago (bought against the day I'd get over Knit Intimidation). This was sewn together almost entirely on the overlocker, which is what I'll be doing with ALL knit tops from now on. I just had to be careful I pinned it well so that the stripes matched neatly (which they do!) - and of course ensure that I didn't run over any pins (doooooom!) 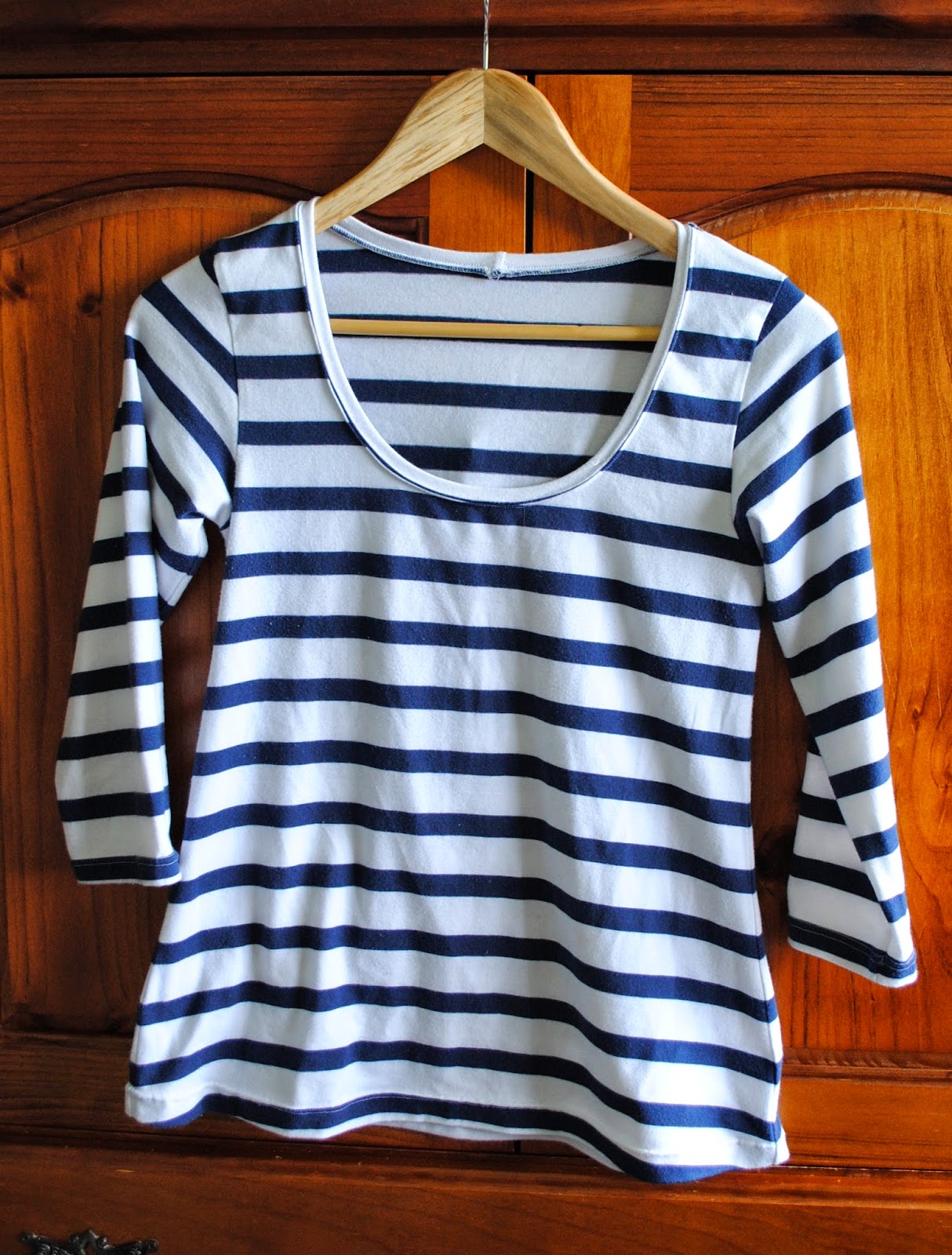 The sleeves and hem were done with my twin needle, which I also used to top stitch around the neckline seam. 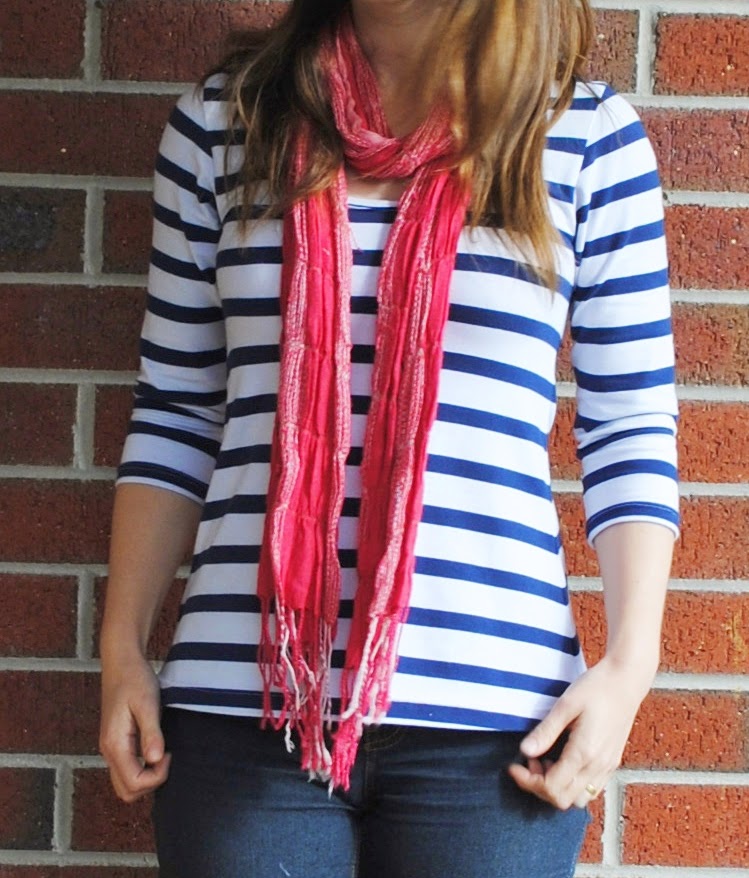 I love how relaxed the fit is, without being sloppy. The pattern is drafted really well; the neckline especially went in bee-yew-tifully.

I actually made this back in May, and it very quickly became a staple. I think I got lucky with this pattern - which is not to take anything away from the design/drafting. I just mean the neckline is exactly the right depth, the ease is just as I'd like it, and the shoulders are in precisely the right spot to stay put and not pull. And I just sewed up the pattern as is! It's actually the best fitting knit top I've ever worn - including RTW. So much for Knit Intimidation! If only every sewing challenge was as easily to overcome...

The neckline isn't flawless - I tried to keep it completely on the white stripe, but there's a tiny bit of navy in there that I didn't notice had slipped in until after I'd sewn it. I can live with that more easily than taking it apart and trying to fix it though... 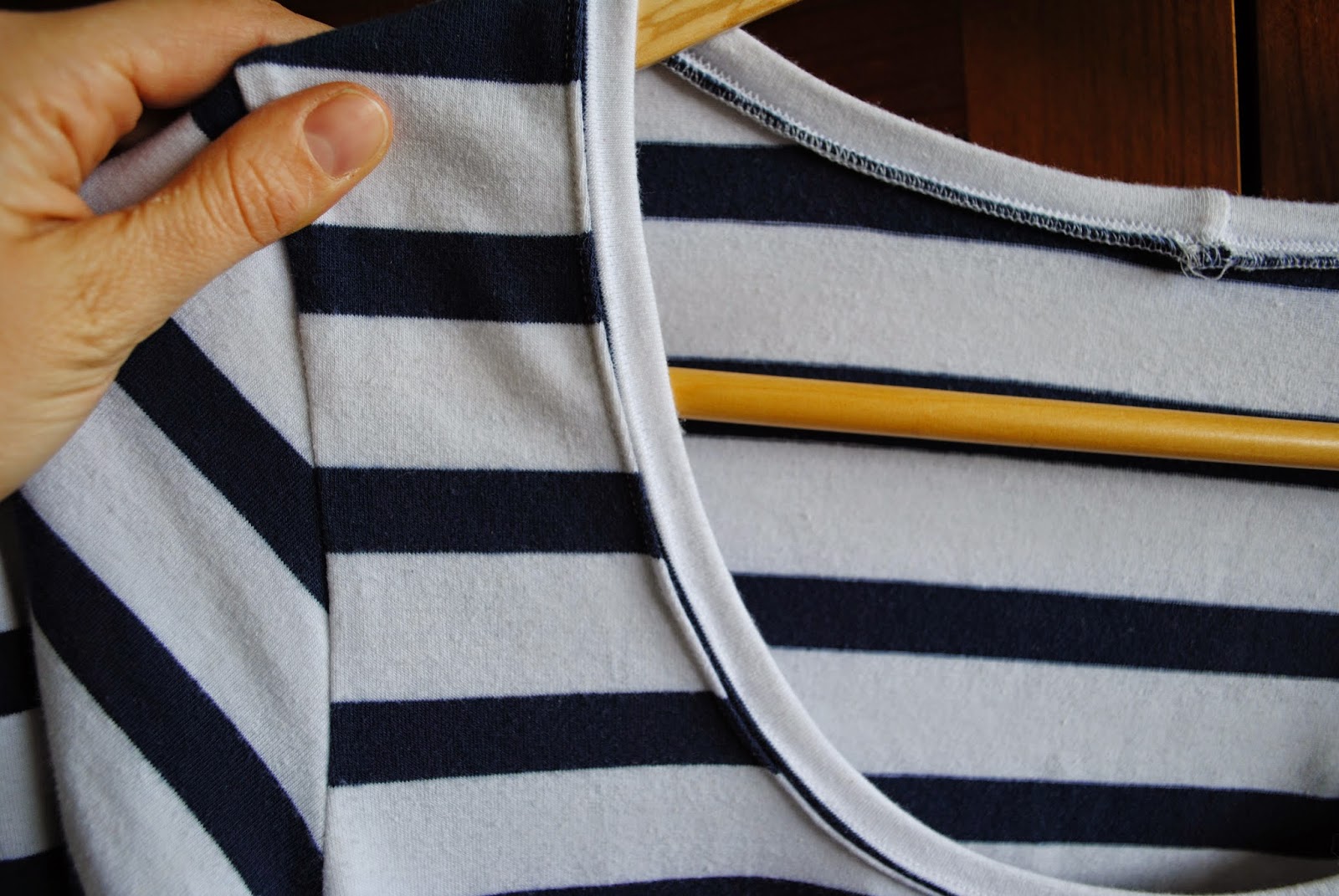 Like I said, this became a staple favourite right away. But I was curious as to how the pattern would behave with a really drapey knit. I found some at our local gem of a fabric store not long afterwards, and as I was admiring it, and wondering how it would look, I noticed the sales assistant was actually wearing a top in the same fabric! Sold me :) 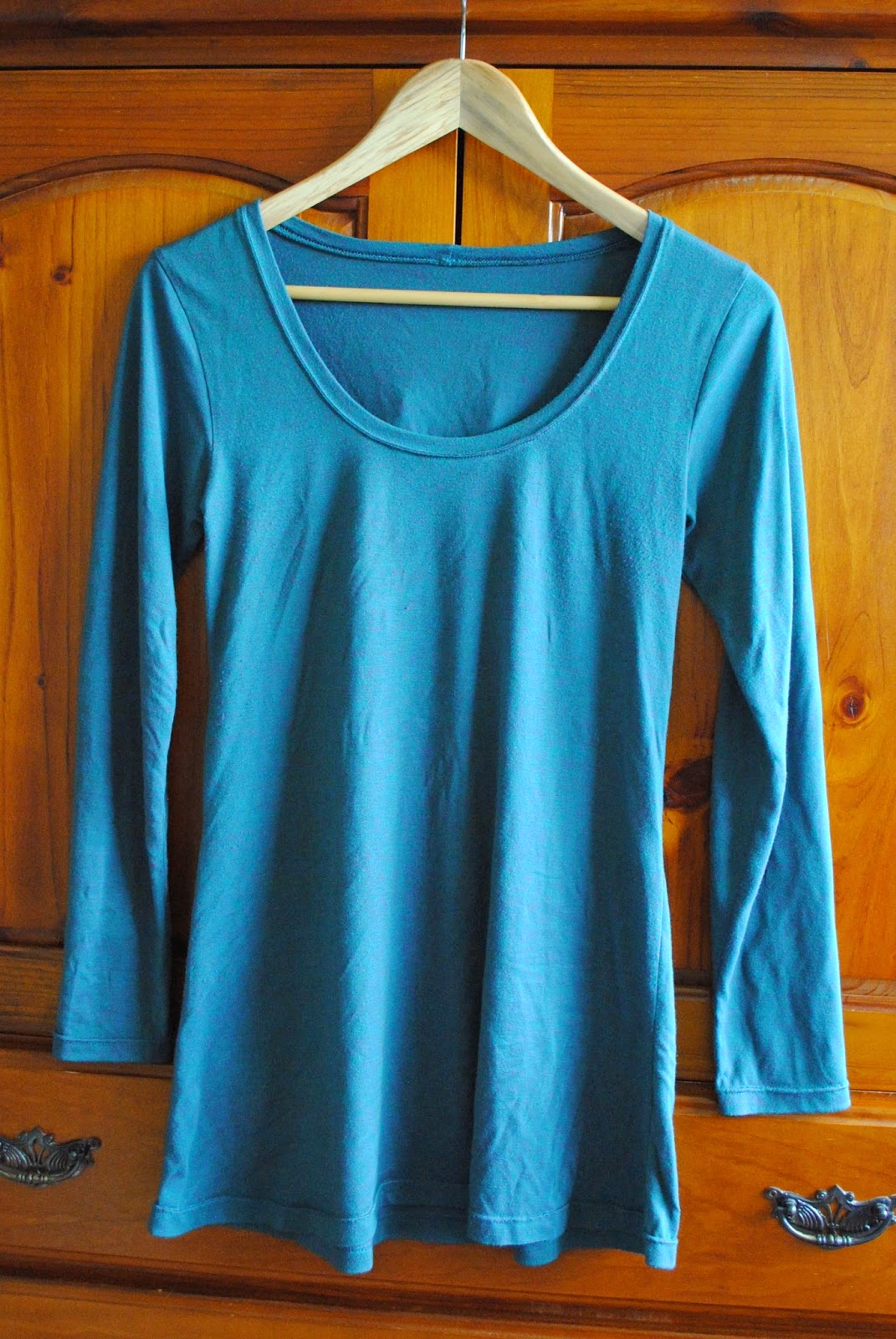 This muted green in one of my favourite colours to wear - and it's really hard to find in fabric or RTW. I decided to go with the long sleeves for this version, and since it was so drapey, tried adding 12cm to the length to make it more of a tunic style. I really like wearing it with my ponte leggings... 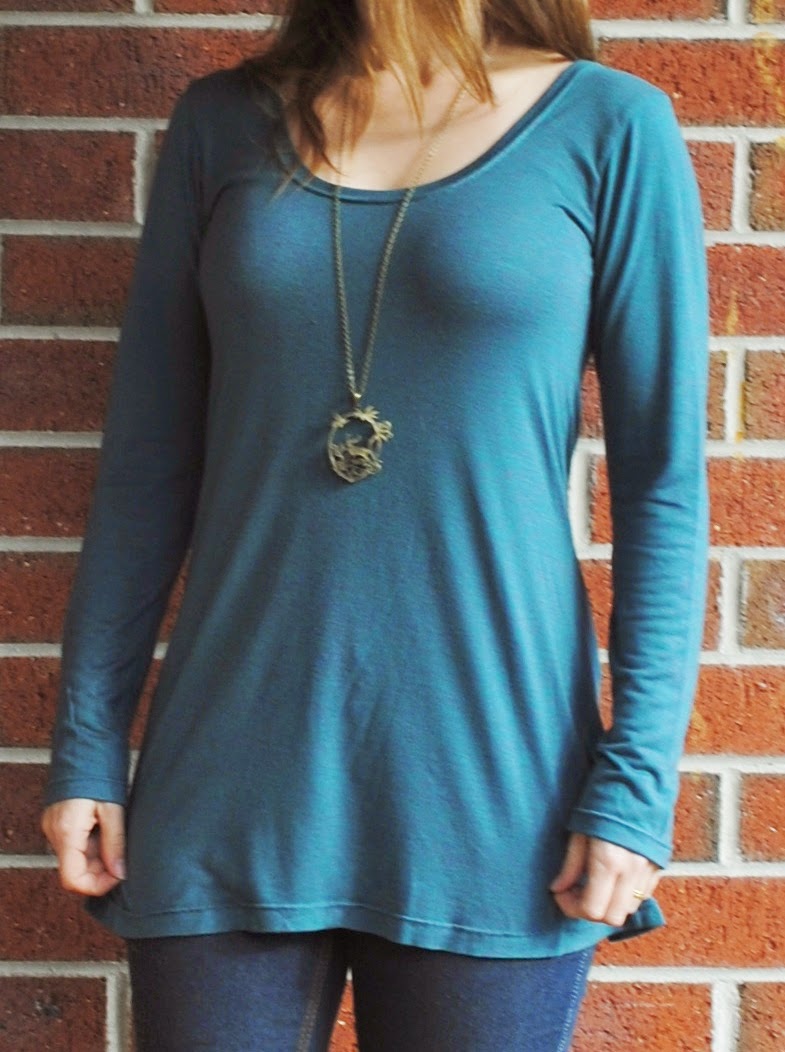 The colour's really intriguing when you look at it. I tried a close up to show - it's woven (knitted?) in teal and magenta threads. I love seeing the way colours mix together. 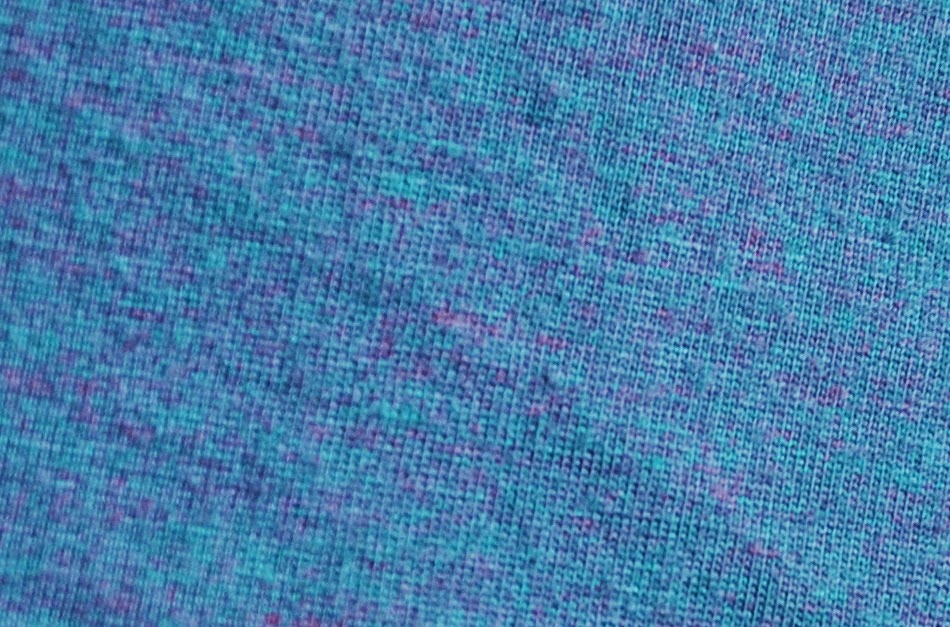 So there you have it - you can add my name to the long list of Plantain Lovers! I'm thinking merino wool for next time...

On another very happy note - all the school production costume sewing is done. (Satisfying, but I don't remember ever feeling so tired before!) The show's in two weeks, so the proper countdown is on :)

I did take one day off from costume sewing a few weeks ago, and had a blissful time fabric shopping in Melbourne with a friend. I'm trying to buy fabric for the next season or so of sewing in one big go, rather than bits here and there. I'm finding this a) helps me buy for items that will end up coordinating with each other, and b) means I'm actually spending less overall, since it's more considered, planned and non-impulse. Mind you, a few other purchases slip in occasionally, but even they tend now to be really satisfying finds rather than spur of the moment and swiftly regretted buys.

On the way back, we were talking about clothes we loved when we were little. It occurred to me how unrestricted we were as kids when it came to what we liked and didn't like in terms of clothing, and how typically our opinions gradually become increasingly defined and controlled by society/the fashion industry/ RTW. Here's what I'm trying to work out - is this just a result of getting older, or is this connected to the general loss of personal dressmaking skills nowadays?? Sure, there were definite "looks" in the 60s and 70s, but I think choices within those looks were more varied when you knew you could make it (or have it made) in any colour or fabric or print you liked. Non-sewing people today are completely controlled by what's on offer this season, whether it suits them or not... and I know how I would let myself be dictated to in that sense before I started really sewing for myself.

Does that make sense? I'm just musing over it. What do you think? Do you think being able to sew your own clothes enables a more definite sense of personal style? Do share!