Hello all! I didn't get a chance to post last week I'm afraid, but it was in a good cause - I realised just how close the Sew For Victory Sewalong deadline actually was. (insert slightly panicked gulp here.) I have to confess I'd fallen into my usual pattern best described as yet another Head vs Heart conflict: Head likes to be organised and on top of all projects, while Heart prefers to adopt a policy of Blind Optimism. But last Thursday night, when I'd usually blog away merrily, it became inescapably clear that unless I sat down and did some actual sewing there would be a full-scale panic over the next week.

So I skipped the posting in favour of sewing, and after a couple of days hunched over the machine I got it done. I'm extremely grateful to whatever sewing gods there may be that there were no modifications needed, because Blind Optimism left no time for venturing off the beaten track! 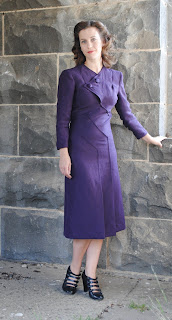 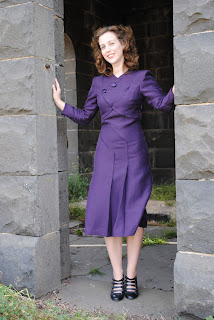 I really, really enjoyed this challenge! I more admire vintage style rather than actually sew and wear it, so this was something new. I used a silk and hemp blend which was lovely to sew with, and feels glorious to wear (or will, once Autumn here behaves itself and cools down a good 10deg or so). I used the matte (wrong?) side, which has a beautifully fine corded texture. It does fray a bit though, so next time I use it I think I'll finish the seam edges first. (The pattern didn't mention seam finishing at all, so I was going at the inside of the dress with the pinking shears at the end. Not ideal.) Plus, it wrinkled more than I anticipated - is this just to be expected with hemp like it is with linen? They're cousins of sorts, aren't they?

The construction techniques listed in the pattern were so different to anything I've attempted before. I LOVED the asymmetric panels, which are cut both on the grainline AND on the bias (where they angle upwards); they gave an amazing and effortless fit - snug and structured. And the actual construction of them was something I hadn't come across before: the lower piece has the seam allowance pressed under, then is lapped over the top of the upper piece and topstitched down 3/8" from the fold. Tricky at first, especially since these seams were also curved, but really satisfying to get right! See below: 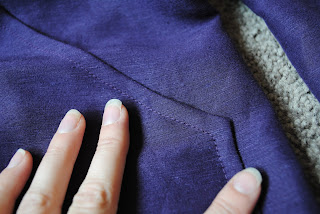 There were several little design details like that, things you simply don't find in modern patterns. Things like the shoulder darts or double bust darts that take a bit of extra time and effort, but give an elegance to the fit that's often lacking today. Definite food for thought in approaching future projects... Oh, and my favorite of those little design details? The elbow pleats on the sleeves! 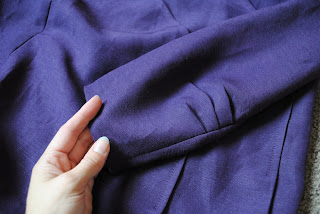 Moving on: here's where I ran into my main difficulty: bound buttonholes. I'd never attempted these before, and in hindsight really wish I'd given myself enough time to practise before doing them on the real thing. They're passable, but not immaculate like the ones in my reference book (which to be fair had probably been sewn by someone who'd done them once or twice before...) So there's a skill to master in the future. 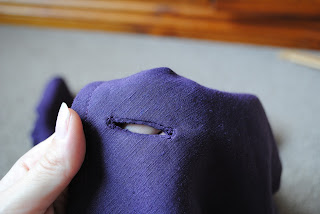 The back of them aren't too bad though: 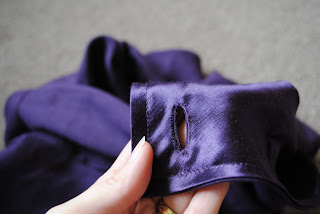 The other main difficulty - and this really was irritating (and self-inflicted) - was because I was using the "wrong" side of the fabric as the right, I kept sewing seams together inside out, i.e. with the satin side as right. Grrrr! I discovered how often I sew on "auto-pilot" though - far too much! I did actually like the effect of the satin as right side of the facings though - decided that after I sewed them that way accidentally on the bodice and didn't want to unpick yet again  - so went with that on the sleeve facings too: 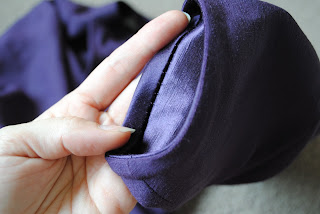 I was surprised by how much hand-finishing there was to do. I've never really bothered with that much before - I always thought it would make garments look a bit "homemade" (in a bad way...), but I actually really like the control it gives over hard to reach areas. So here's my first hand-picked zipper too: 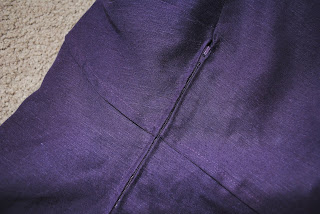 I'm really, and possibly excessively, proud of that one!

I'm so glad I had a go at this challenge! I feel like I've learnt a lot from this one, in terms of construction techniques, design details and finishing. I've also learned to allow plenty of time for future projects, and (perhaps more importantly) to actually use that time to get familiar with the pattern and practise any new/never-before-encountered techniques. So we'll chalk this project up as a success!

Now I just have to work out how to add some of the photos onto the SFV Flickr page - an as yet unattained skill....Wish me luck!  Then I'm going to spend a happy few hours catching up on some of your lovely blogs. :)

Happy Easter! Have a wonderful break :)

Danielle oxo
Posted by Danielle Krivan at 3:49 AM