Happy New Year everyone! Hope yours has begun happily and heathily.

Now this technically isn't the first make of the year, but I've got something of a backlog of unblogged projects (mojo was running high during October and November...) I have a feeling this may not be to everyone's taste, but I really don't mind that because personally I love it. Do you know, it occurs to me that before I started sewing for myself two years ago I could never have said that? Much less, meant it? Sewing really has given me much more confidence in my own opinions and taste!

I very rarely impulse buy fabric anymore - I like having a controllable stash far too much :) But occasionally if I spy a really wonderful print or just the right kind of sparkle that piece is going to come home with me. And so it was with this ever so slightly sheeny, made-in-Italy gem I found in the remnant basket at my local warehouse. It's a collection of painted city scenes, cafes, restaurants etc, printed in all directions. Having held it up from each edge in turn in front of family members, the verdict was evenly split over which way was up so I figured it didn't matter. There was just 60cm left, which I was hoping would be enough for a longer line pencil skirt, using trusty old New Look 6107. (Two other me-made favourites from this pattern here, and here) 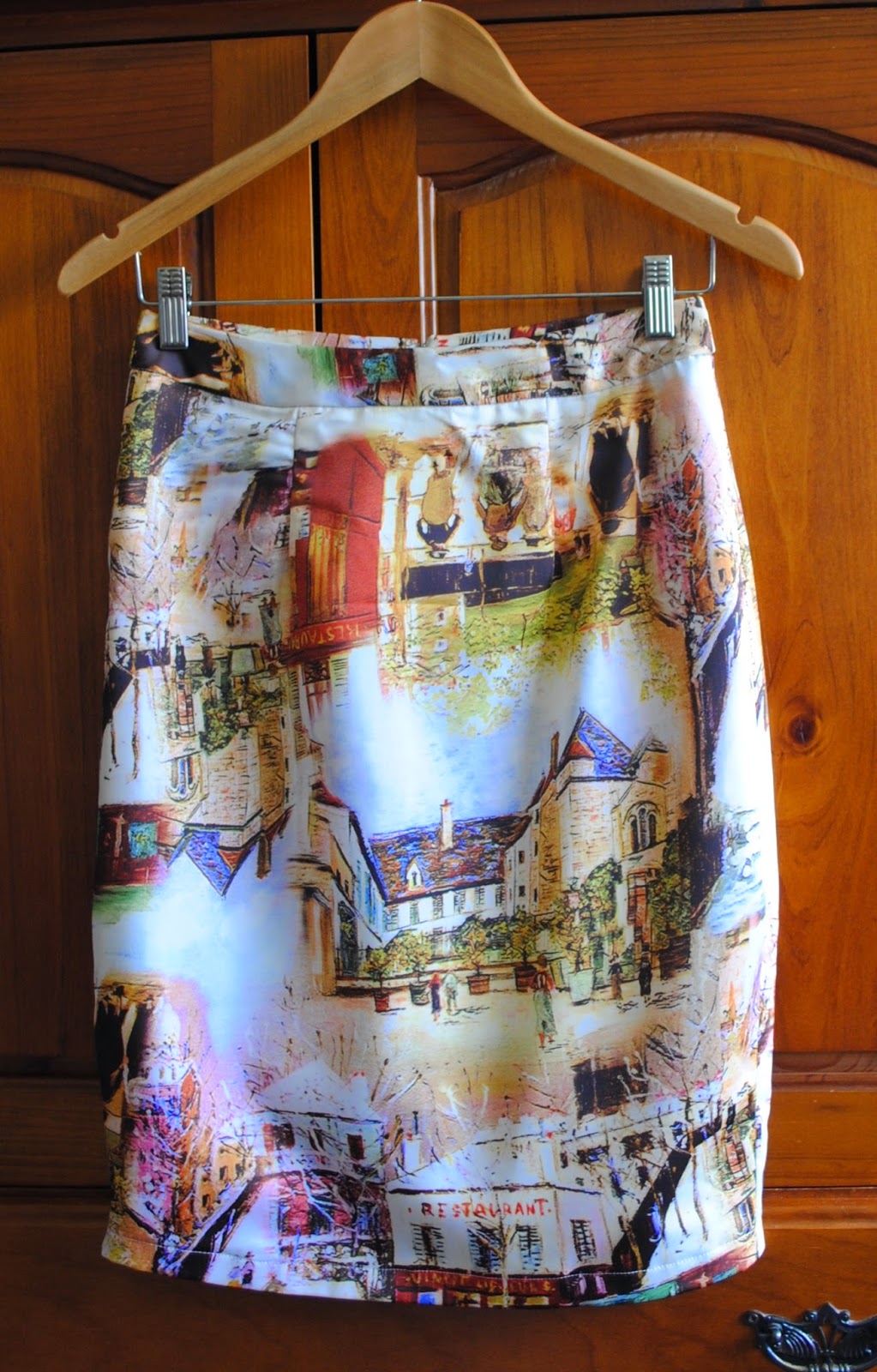 The reason I loved this print so immediately was that it reminded me vividly of a painting of my grandfather's, an artist, that used to hang in their holiday home. That was a cityscape too, and I remember I used to love staring at it when I was little. There was a real energy to the scene, and part of me was genuinely convinced that if I just looked long enough or at just the right moment I'd see the people and trams start to move....It was one of my favourite things about visiting there :)

Naturally, I wasn't about to leave it in the remnant bin! Here's a close up - you can see some upside down people near the top... 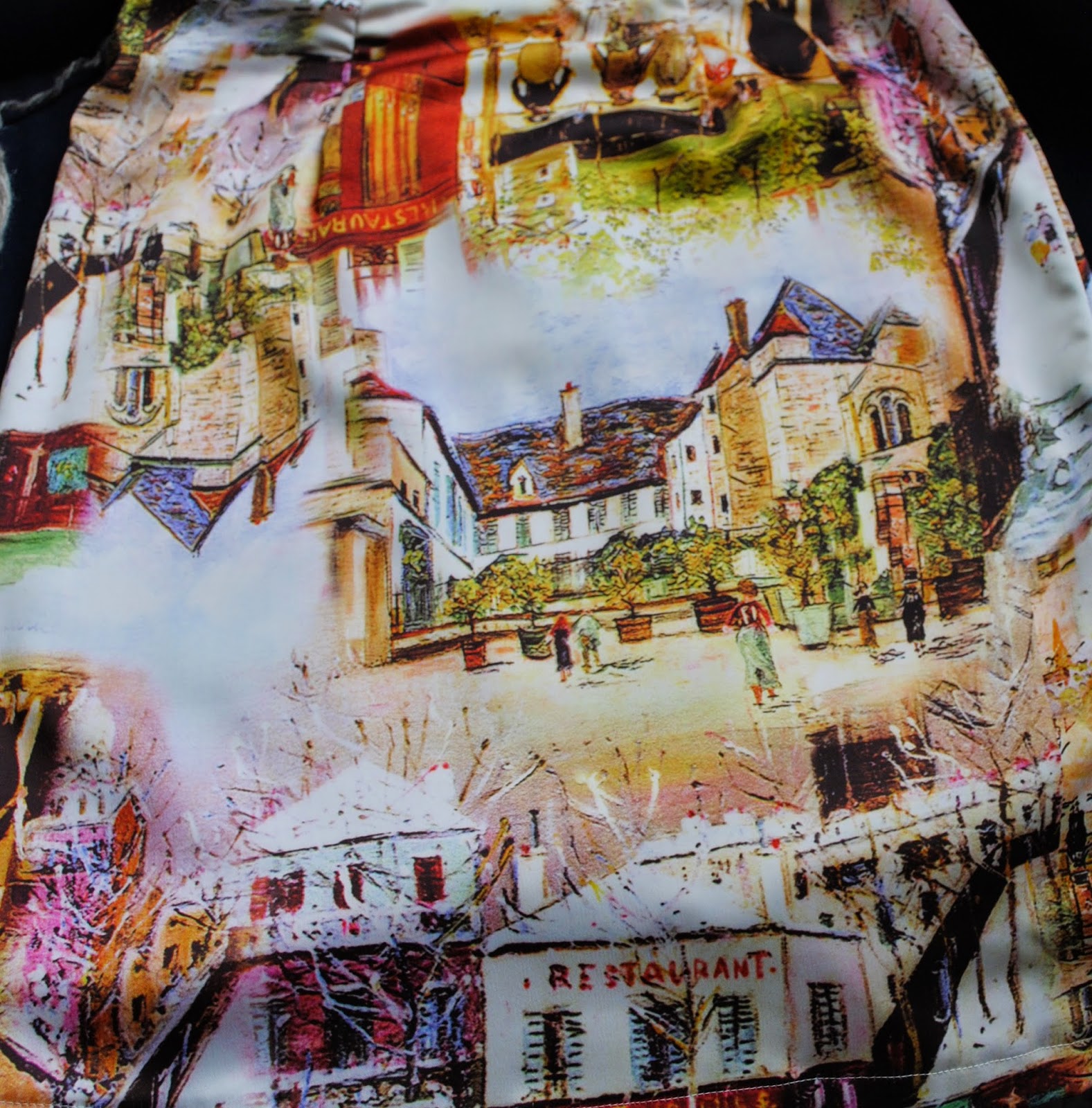 My art knowledge certainly isn't all it could be, so I've no idea whether this is / these are famous pieces, and I don't recognise the signature below. If it is well known and anyone could enlighten me as to the artist, I'd love to know! 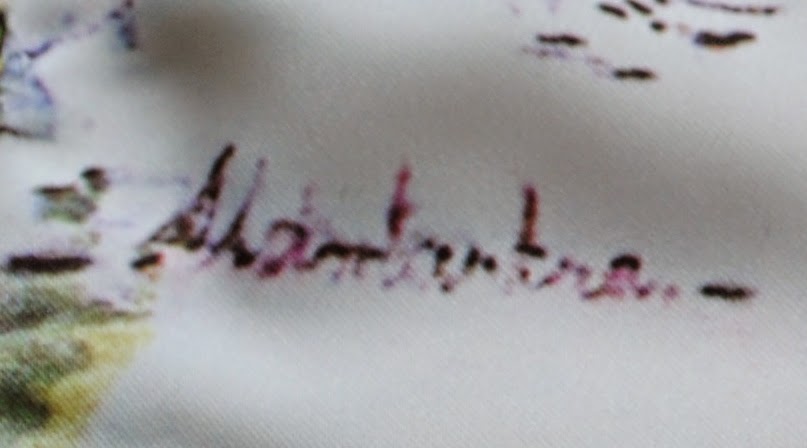 Aside: Here's a tip I wish I'd heard before prewashing this fabric - serge or zigzag over the cut edges first. Not doing this cost me 5cm (2") of length - believe me when I tell you this stuff frays like no one's business. In any case, it's not quite as long as I planned and hoped for... 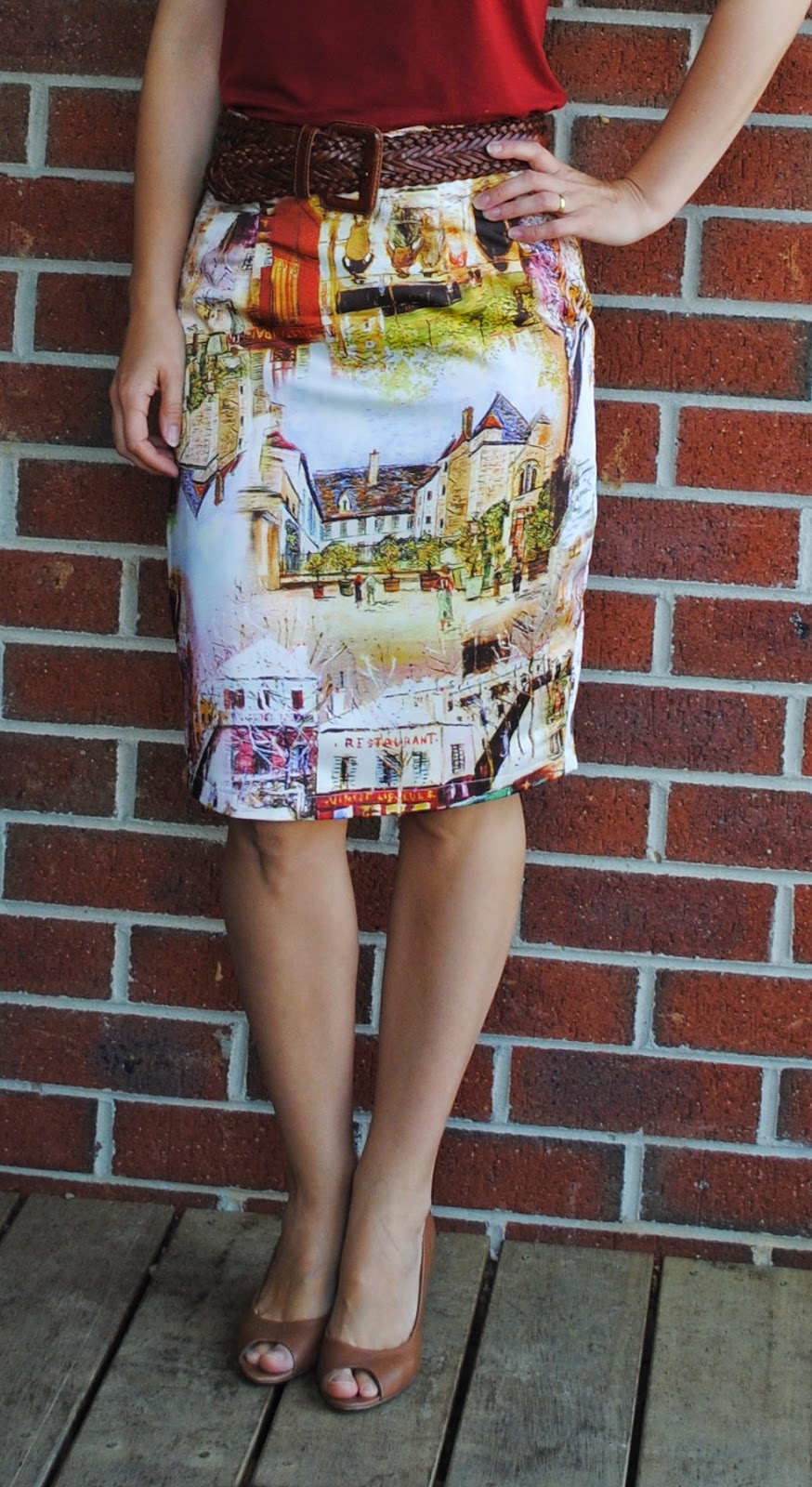 What was left after prewashing gave me enough to cut a length halfway between view D & E.

The size 8 is a comfortable fit at the waist and hips on me, but I wanted it a bit more tapered at the hem. In the previous versions I did this at the back seam, but since I wanted to have the kick pleat on this one, I took it in at the side seams instead. 1" at both seams was enough to shape it and still allow for walking comfortably. Which is important. (And my one quibble with the BHL Charlotte skirt)

The fabric wasn't flimsy, but I wasn't sure whether it had enough weight to cope with tucked in tops, so I underlined it in a beige poplin. It's nicely structured now. Edges were just overlocked, and I quite like the look of the patterned seams against the plain insides. 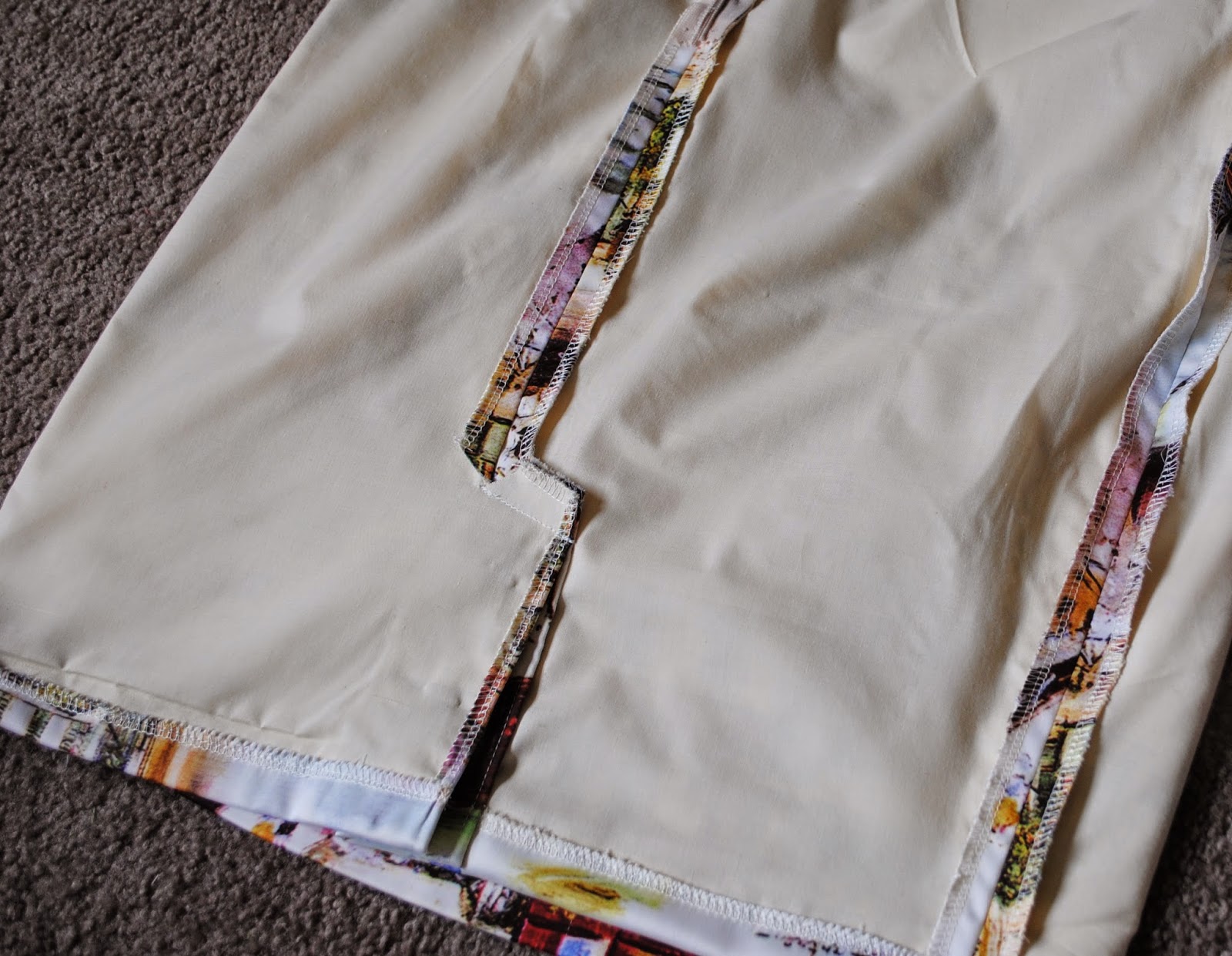 I found the waist band seams were getting quite bulky, even after layering/trimming, so I decided to try binding the lower edge of the facing with bias binding - a decision made easier by the fact that I already had some just the right colour. I hadn't tried this before, and I really like it; it's a nice little finish. 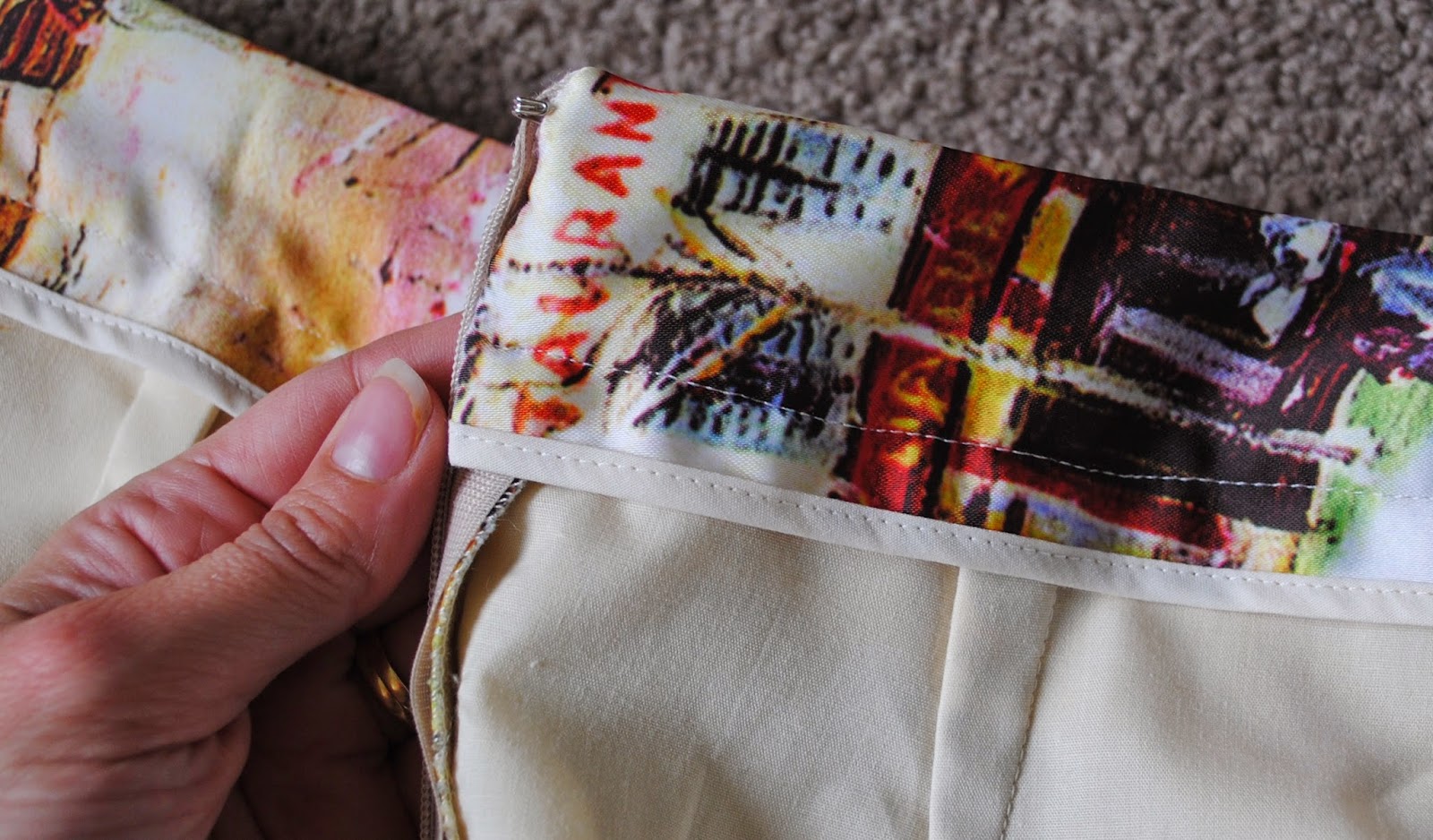 This, I foretell, is going to be a pretty useful transitional piece. It's a bit heavy for hot weather, but for most of the rest of the year I think I'll get plenty of wear of it. (We had a cold snap in October so I can confidently state it also works very well with a jumper, tights and boots). Win!

Last post I shared re goals for 2015, particularly re slowing down and sewing fewer garments, but putting more care into ensuring I made each one the best I could. There was a photo I'd seen on Pinterest, that was actually what starting me thinking along those lines. I couldn't find it while I was writing the last time, but have since:

I don't know who these women are, where they're from, or anything about them, but I was so inspired by this photo. All that incredible, intricate, painstaking work! It's just extraordinary.

2014 for me unintentionally became about making as many items on my master list as possible. In retrospect, I'm not sure that really fits into the ideals behind 'slow' fashion, which is what prompted me to start sewing my clothes rather than buying RTW. I know I had ideas about garments, in terms of finishing, embellishment or technique, that I dismissed because "it would take too long". (Even on this skirt, I debated trying Hong Kong seams and didn't, solely because of that.) I want to get to the end of 2015 having made garments I'm really proud of. That's the plan, anyway!

Posted by Danielle Krivan at 3:38 AM