Some patterns are friendly. Some are barely civil. And then there are some that you expect are going to be hard work, but turn out to be surprisingly accommodating. Exhibit A: Burda 7214, a close-fitting, jeans-style pant, with fly front and (in View A) knee panels and zip openings at hem. (I have to apologise in advance for some pretty average photos - I didn't notice the heavy shadows until well afterwards, and, since I'm already so far behind in posts and am finding it hard to get time to photos taken, I decided bad photos were better than no photos....) 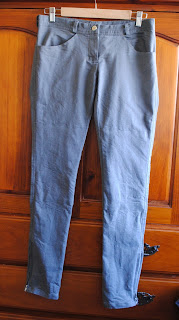 I used a grey stretch drill - the pattern calls for stretch fabrics - which behaved very nicely throughout. I do feel after having worn them several times that something just a little heavier would have perhaps been a better choice, but it's not a big complaint. I'd really like to try this pattern some time in a stretch denim. 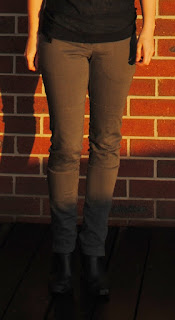 View A had the option of panels/bands at knee level - hard to see here, but detail pic below - and I while I liked them at the front, I didn't include them at the back. It also called for zips below the front pockets, which seemed like overkill to me, especially since they weren't functional but just sewn on for decoration.

The ankle zips were supposed to be 25cm/10", but that looked a little too long to me, especially since I had to shorten the legs by 6cm. I used 15cm /7" instead, which seemed a better proportion on me. 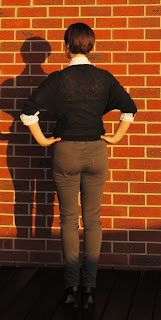 The main reason I found this pattern so accommodating was because the construction steps made fitting relatively painless. The outer leg seams are sewn up (with zips inserted) first, and since these are meant to be a skinny style, it was just a matter of pinning the inside seams to fit. I ended up taking each leg in 0.5cm at the crotch and tapering down to 4cm at the ankle.

I have a fairly pronounced swayback also, but this adjustment was greatly helped by the fact that the waistband is sewn on before the centre back seam is done. This means the back seam can be adjusted to fit without impacting on any other steps. I had to take a good chunk out, evidenced by the fact that when unworn the pants don't lie flat! Never mind - I'd rather they look better on me than on the hanger. :) 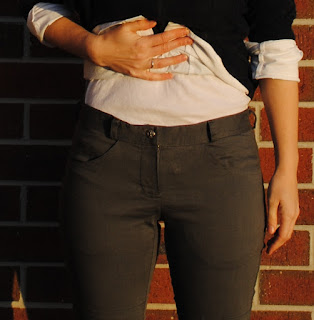 One tiny disappointment, and the main reason for thinking a heavier fabric would be preferable, is the fact that the front pocket linings are kind of obvious - see above. Now all I've read suggests that when that happens the pants are too tight, but I'm not sure that's the problem here since I can comfortably fit my arm down the front of the pant legs when I'm wearing them. (I know that sounds slightly concerning - it was in the interests of research, I promise!) The linings are just a lightweight cotton, so shouldn't be evident; I'm going to chalk it up to not-quite-ideal fabric choice. 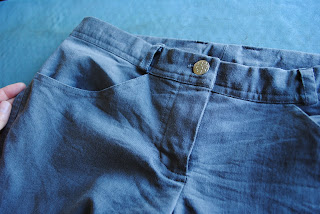 First ever fly front attempt here! I had to read through the instructions several times before it all started making sense, and even that only happened after going over Closet Case Files's tutorial with intense concentration. We got there in the end though, and I'm pretty pleased with the end result.

My favourite detail though was inspired by Helen's gorgeous quilted Linden. I loved the effect she created on the front, and had been waiting for the right project to attempt something similar. There was already a lot of topstitching on this project (way more than I'd ever done, anyway!), so I thought more stitching as a decorative feature would tie in quite well. So I sewed horizontal lines at 2cm intervals over the knee panels and, even though it's a fairly subtle detail, I think adds a nice touch! 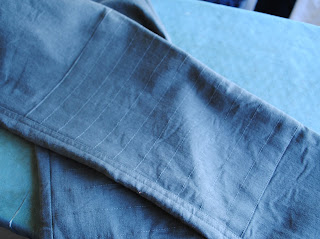 An enormous help in doing this neatly was the quilting arm/attachment that came with my machine. Funny thing is, I never even noticed it (or my edgestitching foot! Love!) until a few months ago, when I started teaching a friend to sew. Not being familiar with her machine I read her manual and later discovered I had all the same enviable accessories she did, yay! Googled image below - it's the backwards "L" shaped piece, and the long end slots into the back of a standard presser foot; you set it so that the other end sits at whatever width interval you want. Simple, but so very helpful!

The pattern instructed that the ankle zips be sewn on top of the fabric, but I didn't like the look of that and sewed them inside the seam instead. 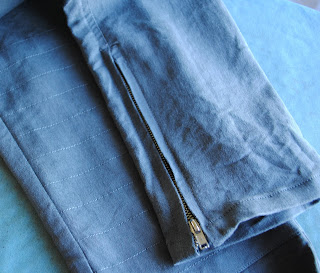 Back view, and you can see here how the upper back doesn't quite sit flat. The next pair I make of these I'm definitely making the pockets a bit smaller. The positioning is fine at the upper edge, it's just that I think they look way too low by the time they finish. (I'm not sure if you can tell in the above back view, so you'll just have to take my word for it.) 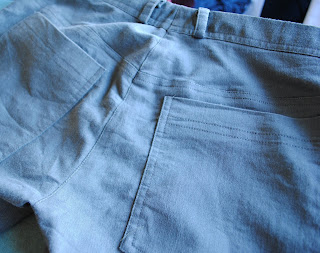 Minor niggles aside, I'm pretty pleased that I've made Complicated Pants/Trousers! It's given me enough confidence to attempt a pair of jeans based on a much loved pair that finally wore out last year. I'm not sure if I want to make jeans-making an ongoing thing, but these were my favourite ever and in theory at least, since I know and love the fit, won't give me any fitting issues. Or does that just sound like sheer blind optimism?? I guess we'll see...
After I've sewn those up, I've decided to take a break from sewing for a bit. (I'm hoping that won't translate to posting regularity, given my project backlog....) See, I finished Me Made May this year feeling really dissatisfied, and that feeling actually intensified during June and July. It's not that I don't like the things I've sewed for myself, it's more that my me-made wardrobe feels really disjointed and lacking in cohesion. In all other areas of my life I try to simplify and declutter, yet in sewing I feel like I've been increasingly driven to buy and make more and more and more stuff. My wardrobe is full, yet I'm still accumulating and wondering what to wear every morning. I'm feeling like the proverbial hamster on a wheel; working harder and harder to no real effect!
For those reasons, I'm taking time out. I've been working through Colette's Wardrobe Architect, which is excellent. I've been reading through pretty much every post written on the Into Mind and Unfancy blogs. I'm getting more and more excited at the idea of a seasonal capsule wardrobe. I want a smaller, more thoughtful and considered collection of clothes that are exactly right for me and that I love every time I pull them on. And it's become patently obvious that I can't do that without investing some proper time and thought into the process.
So, that's the plan and I'm feeling good about it!
﻿
Posted by Danielle Krivan at 5:34 AM