Well, we're nearing the end of Sew Grateful Week and today's topic is the Sew Grateful Project, namely one that's utilised something gained from the online sewing community. Here's mine, the Ginger skirt from Colette Patterns: 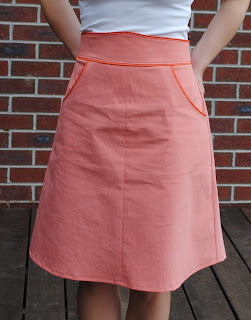 (Hmmm, probably should have taken photo before a full day of wear. Or at least ironed it first...)This was my first experience with an independent pattern company. I only discovered they actually existed when I started reading sewing blogs two months ago. Verdict? Thank you Online Sewing Community - I am absolutely and utterly sold! I think I mentioned in an earlier post that I haven't sewn much for myself; this is because a) I got right into costuming instead (ran a small business for a few years until it became inescapably clear that I am not a, shall we say, natural businesswoman), b) it's much easier to fit other people, and c) I got fed up with so many of the commercial patterns on offer that needed so much design and fit tweaking before I was happy with them. Forgive me if this sounds like I'm yelling, but THIS IS THE FIRST PATTERN I HAVE EVER MADE THAT FITS WITHOUT ANY ADJUSTMENT! It actually is the size it says it is! I am beyond excited about this, and have already bought some patterns from two other independent companies on the strength of it (with several others also in mind). To me that's a big fat win-win - an outstanding product plus supporting small business. Woo hoo! 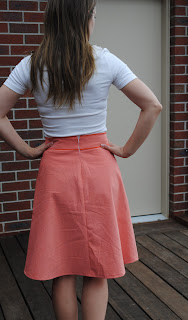 Since the mock up - as I've gleefully said and don't mind repeating - fit perfectly, I figured I could play a little. When I saw the fabric, thick cotton with a bit a stretch, it was rolled up so that the wrong side was outermost or visible. I really liked the colour of it; it was soft without being too pale. Then I unrolled it slightly. It was really, really ORANGE. Not just orange. ORANGE. (I'm yelling again, but only to give you an idea of just how intense a shade it was). Now I have no particular quarrel with orange per se, but a skirt that colour in my wardrobe would have ended up a sad and lonely shut-in very quickly. So after a quick conversation between Head ("is it really ok to sew a skirt inside-out??") and Heart ("it's my skirt and I can do whatever I like"), I grabbed it and ran with it. (Heart felt quite smug when a friend who saw me wearing the finished skirt exclaimed, "that's such a pretty colour!". Heart 1, Head 0)

I added pockets, because pockets are important. I'd seen on the Colette website a tutorial for sewing flat piping, which I'd never tried before. I thought that a was a handy way to use some of the ORANGE side (sorry, can't help it). I'm always intrigued by ways to use the main fabric of a garment as a design element rather than trims. Excellent tutorial - I highly recommend it. Plus, there was another tutorial on how to make bias tape using the continuous method. I read it and frankly, my jaw dropped. Genius. I tried it and it worked beautifully. The only hiccup was that using the 10" square left rather a lot of joins. It was fine for the pocket sections, but I wanted one long continuous piece along each side of the waistband. So I just cut strips from leftover fabric for those. I'm thrilled to have found the method though, and next time I use it I'll just start with a larger square. 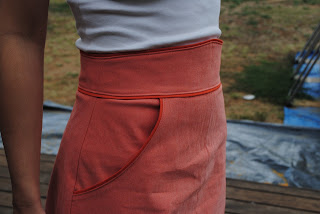 I did notice that annoyingly some of the piping is a little uneven in places. I've gone back and measured minutely and I'm pretty sure I can chalk that up to my cutting rather than my sewing. Even a millimetre out can make a noticeable difference at this scale. Lesson learned for next time, and anyhow, I'm satisfied with for a first attempt.

So there we are. Definitely a new piece of Wardrobe Cake to figuratively munch on. And I have two more Gingers lined up on the desk. Hurrah for go-to patterns!

Have a wonderful week :)
Posted by Danielle Krivan at 3:15 AM